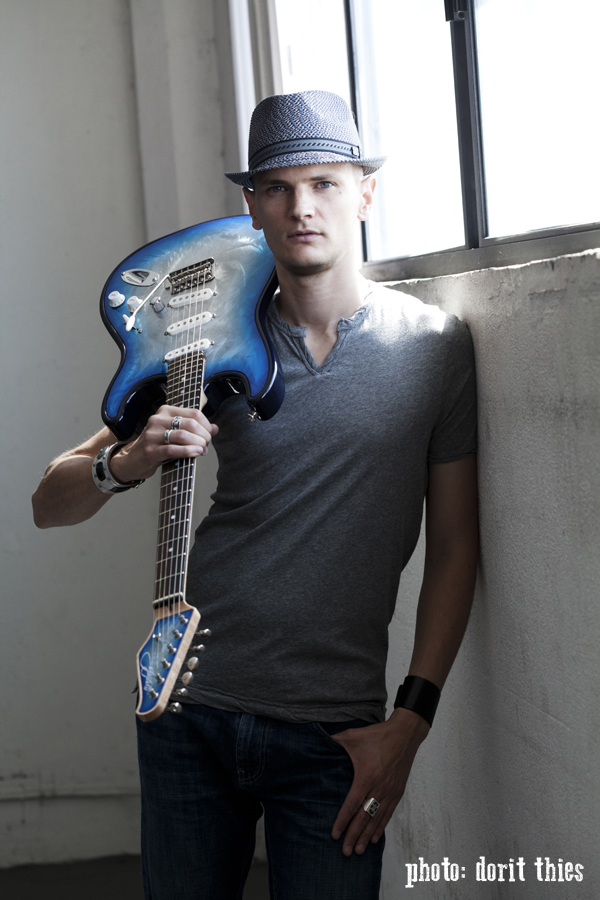 Micha Schellhaas is an L.A.-based guitarist living his dream and fulfilling his mission to make music as a solo artist, accompanist and composer. In 2013, he released his first EP, Wings of Fire, recorded at the renowned Sunset Studios in Hollywood. Wings of Fire was produced by Carl Verheyen (Supertramp) who also performed on the tracks, and featuring several other industry veterans (Chad Wackerman (Frank Zappa), Dave Marotta (Burt Bacharach, Gino Vanelli), Jim Cox (Mark Knopfler, Robben Ford)). In December 2015 he released his first full length album DOUBLE TAKE featuring the same band and 9 brand new original tracks. Heavily influenced by classic rock, blues and jazz, Micha has been playing guitar since he was 9 years old. Born in Germany, his musical career began in Europe where he gained a Master’s degree in jazz guitar from the prestigious Dutch ARTEZ conservatory, and produced music from his former recording studio, TRINIX Studio, in the Netherlands. Having performed and toured in numerous European countries, he took on the U.S. for the first time in 2008, to explore the home of original blues and rock ‘n’ roll music and the main inspiration for his artistic journey. Coast-to-coast travels included an extended stint in Austin, Texas, where he was actively involved in the local jazz and blues scene, and enjoyed the opportunity to perform at the renowned SXSW festival with his improvised street band, the “Rebel Street Show”. Micha is keeping his bonds with Austin strong, visiting on a regular basis and constantly exchanging with Texan and local Austin artists.

Micha settled in California in 2013, where his musical career has gone from strength to strength, operating from his private recording studio in Venice Beach. With a top selection of classic vintage instruments, amplifiers and state of the art recording equipment, the Micha Music Studio is a home base for recording guitars on his own projects, collaborations and hired recording work. Micha is recording instruction videos and gear demos from his studio as well, most notable is his recent work for the top class, southern California boutique guitar builder Ian Anderson Guitars and Electric Alchemist Pickups.

To work with Micha, experience his music and follow his numerous projects, sign up for his newsletter on MichaMusic.com. Subscribers can preview his upcoming album and enjoy other valuable content reserved especially for the MichaMusic community.

Micha Schellhaas has a unique touch on the guitar that sets him apart from everyone playing the instrument today. That feel,  in combination with his beautiful composing is what makes him a joy to listen to.

Micha has an astoundingly deep toolbox of music in him.  He is able to create great tunes in practically any style, on the fly, out of thin air, to craft wonderful sounding demos of my instruments. He has great tone and his production chops are equally  top notch. He is truly a talented individual.

Micha is an uncommonly sensitive and melodic player,  with a deep sense of time and space. That he is also an expert producer, mixer and collaborator on top of his many instrumental skills just attests to his breadth of knowledge and talent!